Business and human Rights in East Jerusalem: the case of Atarot’s industrial settlement 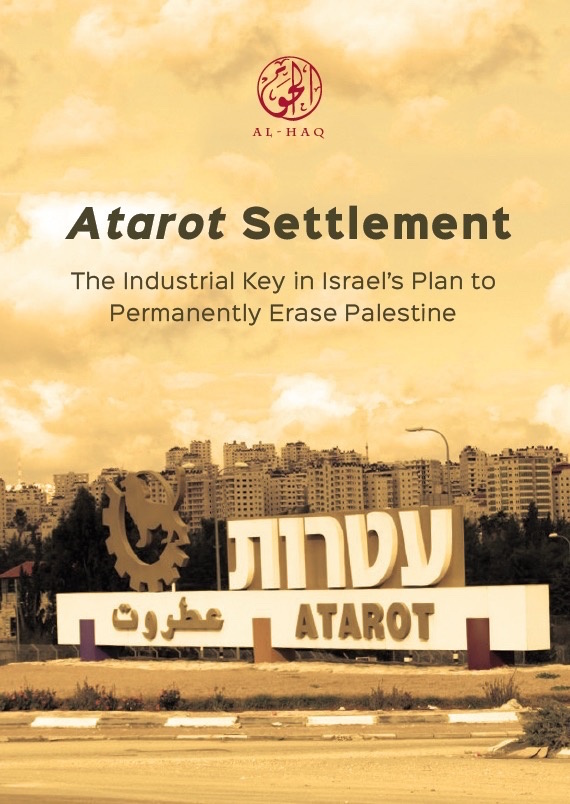 The Al-Haq’s report “Atarot Settlement: The Industrial Key in Israel’s Plan to Permanently Erase Palestine” is part of the coordinated research, awareness and advocacy joint work of Al-Haq, Observatori DESC, NOVACT and SUDS, within the framework of the ODHE and Shock Monitor Observatories, and part of the  project “Business and human rights violations in East Jerusalem: its special impact on the rights of Palestinian women“.

Since 1967, the start of Israel’s military occupation of the West Bank, including East Jerusalem, and the Gaza Strip, comprising the Occupied Palestinian Territory (OPT), Israel, the Occupying Power, has systematically and unlawfully appropriated Palestinian public and privately owned land, exploiting Palestinian natural resources, while forcing the transfer of and creating coercive environments to forcibly displace, the protected Palestinian population. Such measures have enabled and enhanced the Israeli national and settler economy, at the expense of the Palestinian economy and the rights of Palestinians.

Interviews conducted by Al-Haq with Palestinian families, women and men residing in what is now known as the Atarot industrial settlement highlight the devastating consequences of the industrial settlement on individuals, communities and the environment. The interviews shed light on Israel’s discriminatory planning and zoning regime which systematically denies Palestinian communities building permits and creates an uninhabitable environment that does not meet the minimum standards for the right to adequate housing. As such, Israel, the Occupying Power and the main duty bearer, is failing to meet its obligations under provisions of international humanitarian law[3] and international human rights law, including under the International Covenant on Economic, Social, and Cultural Rights (ICESCR)[4] and the International Covenant on Civil and Political Rights (ICCPR).[5].

[2] SC/RES/2334 (2016), “Reaffirms that the establishment by Israel of settlements in the Palestinian territory occupied since 1967, including East Jerusalem, has no legal validity and constitutes a flagrant violation under international law and a major obstacle to the achievement of the two-State solution and a just, lasting and comprehensive peace”.

[3] This includes Israel’s obligations under the Fourth Geneva Convention, which Israel ratified on 6 July 1951, and which entered into effect on 6 January 1952, and its obligations under The Hague Regulations, which are constitutive of customary international humanitarian law.