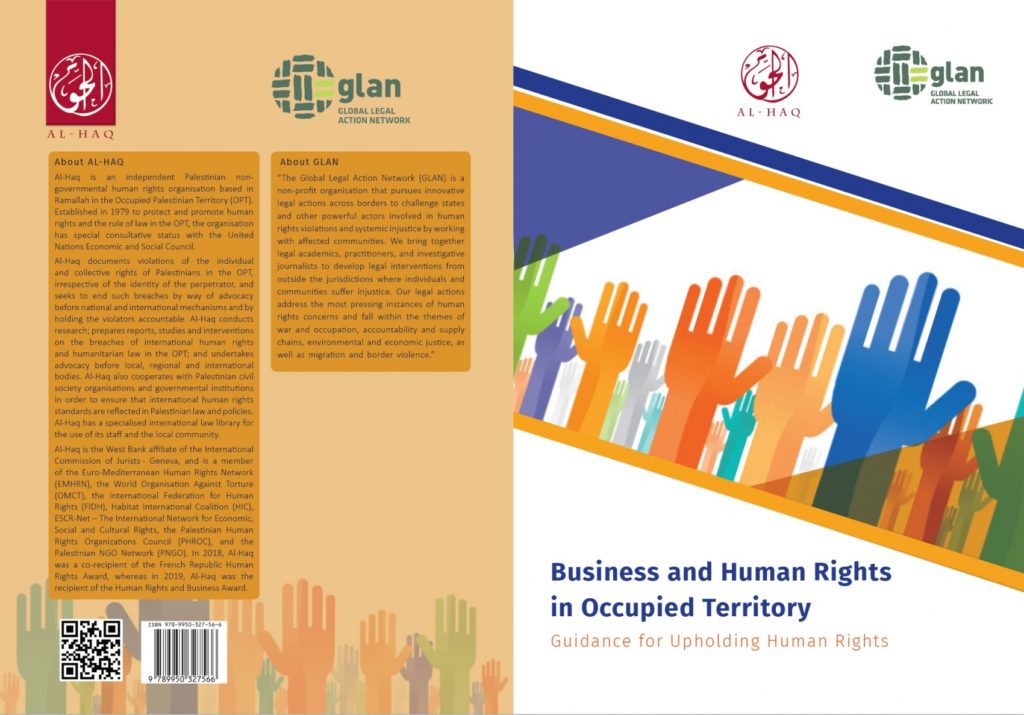 This Al-Haq’s and GLAN report is part of the coordinated research, awareness and advocacy joint work of Al-Haq, Observatori DESC, NOVACT and SUDS, within the framework of the ODHE and Shock Monitor Observatories, and part of the  project “Business and human rights violations in East Jerusalem: its special impact on the rights of Palestinian women“.

The report, closely examines three situations of occupation – Crimea, Western Sahara, and the Occupied Palestinian Territory (OPT) – and the activities of the businesses of the occupying State as well as other foreign companies in these territories. It aims to draw lessons and recommendations for businesses when conducting enhanced human rights due diligence for operations in or relationships connected to occupied territories.  Alongside risks related to causing, contributing or being linked to adverse human rights impacts, the report also identifies the legal, financial, commercial, and other risks that businesses may be exposed to.

Following their unanimous adoption by the United Nations Human Rights Council in 2011, many States, multilateral institutions, and businesses have demonstrated their commitment to upholding the UN Guiding Principles on Business and Human Rights (UNGPs) and the “Protect, Respect, and Remedy” framework laid out within them. While the practical implementation of the UNGPs has been extensively explored, including as related to conducting human rights due diligence in conflict-affected areas, situations of occupation in particular continue to be met with inconsistent approaches by both businesses and States.

Such incoherence is exacerbated by the already challenging legal and administrative environment present in occupied territories, where businesses must not only consider international human rights law (IHRL) but also international humanitarian law (IHL), alongside other frameworks, when assessing their business activities and relationships.

Central to this assessment is the manner in which an Occupying Power administers the occupied territory, where IHL regulates the Occupying Power’s use and exploitation of natural resources, including land, and prohibits measures aimed at the permanent retention of the occupied territory, including the transfer of populations, amongst other principles.

Given the heightened risks of abuse in conflict–affected areas in general, alongside the prevalence of unlawfully administered and prolonged situations of occupation, businesses may be unable to mitigate adverse human rights impacts in a specific setting.