International Conference in Barcelona: CORPORATE IMPUNITY IN CONTEXTS OF OCCUPATION AND CONFLICT 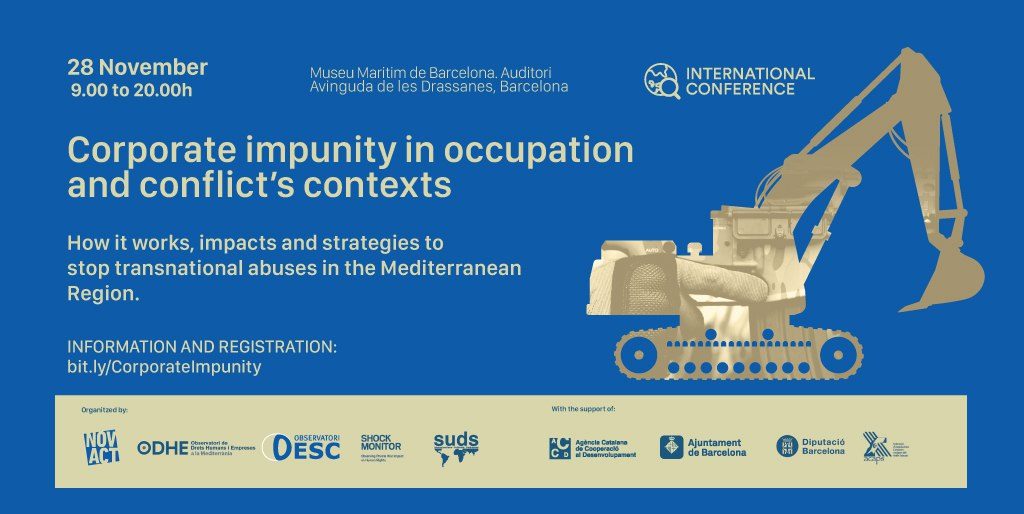 The global dynamics (economic and military) impose a socio-political agenda which generates different forms of violence and right´s infringements. In the Euro-Mediterranean region these forms of violence come in many cases from extractivist projects developed in countries under occupation (Palestine, Western Sahara) or countries in conflict (Syrian, Libya). These places have become spaces of no-rights and, because of that, they have become a conductive market for certain types of business.

The presence of transnational companies in the contexts of occupation and conflict is, in many cases, related with the plunder of natural resources, privatization of water, seizure of lands, evictions, house demolitions, detentions, restriction to freedom of mobility and extrajudicial executions. Those are part of a large number of right´s infringements that serve an extractive and exploitative economic model, which contributes to the actual climate crisis, as much to the perpetuation and deepening of occupations, conflicts, social inequalities and forms of violence where women´s bodies have become just into another territory for conquest.

The States of Israel and Morocco support a sophisticated military and security system which is tested on the ground against the populations of Palestine and West Sahara. This investment in security is made possible thanks to the collaboration of big business belonging to the sectors of technology and arms and, furthermore, gives the necessary security or stability for those enterprises that run extractivist or infrastructure projects.

In places where conflict or war have weakened the presence of the States, the big transnational companies are joined in partnership by military and private security business to ensure their investments and their daily operation, also guaranteeing the exploitation and transport of prime matters they extract from those countries.

Summarizing, it can be said that the military and security industry is a key element in the strategic relation between States and transnational business, and an element that furthers and propitiates the grave violations of human rights produced in these contexts.

The global expansion of transnational enterprises and the privilege that corporate interests receive in opposition to the general interest have developed thanks to the complicity of the States, international financial institutions, multilateral organizations and arbitration courts. Transnational companies escape to any form of control thanks to their legal versatility and the complex organic structures they have created, which they use to evade national and international laws and regulations.

This seminary has as its purpose to develop, from various approaches, a process of knowledge and critical analysis of this situation with the following program:

9:45h PANEL I – The impact of multinational corporations in occupation contexts