Is there a control over the Private Military & Security Companies? 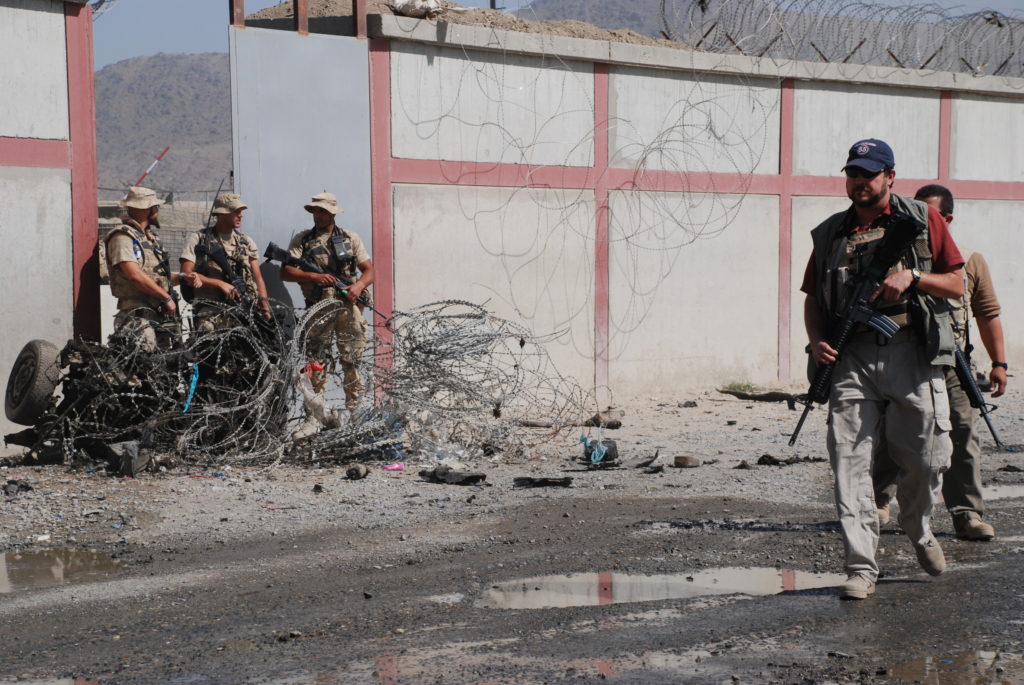 These kind of meetings highlight the necessity of considered actions related to to the sector and serve to consolidate, at the same time, the interest of Catalan public institutions in defining a unique model of outward action, rooted in peace promotion, human rights and sustainable human development. All of these objectives have a presence since 2014 in the catalan law, more specifically in the Llei del Parlament de Catalunya 16/2014, de 4 de desembre, d’Acció Exterior i de Relacions amb la Unió Europea.

The definition of this model comes in a key moment: five years after the Human Rights Council approved the “Guiding Principles on Business and Human Rights”, just 13 countries have developed “National Action Plans” to apply this principles. All of them, however, are criticized by their notable weaknesses, the majority of which exclude proper binding mechanisms; a general absence of consultative processes with civil society and affected societies in particular during their elaboration and implementation; as well as the lack of concretion in the monitoring systems.

With the aim of establishing and implementing a legally binding instrument to regulate the activities of transnational companies in the field of human rights, in 2014, the UN Human Rights Council approved the creation of an “intergovernmental working group on transnational corporations and other business enterprises with respect to human rights,” which will present the first draft of a proposed international treaty by the end of 2017.

At the same time, significant work is underway in the creation of effective international instruments that ensure respect of human rights by private companies, against a corporative sector that has developed a Global Corporate Law, protected by contracts and inversions. These rules and principles established by the private sector are based in multiple contracts of exploitation, bilateral commercial treaties, inversion protection deals, adjustment policies and conditioned loans, among others. The legal asymmetry between the protection of human rights and the transnational companies’ inversions means, in practice, the defencelessness of the victims. In the case of human rights violations, those affected by the activities of these companies lack effective mechanisms to hold them accountable for their actions, prevented access to courts with specific jurisdiction and the inability to demand full reparation.

In parallel, the Corporate Social Responsibility (CSR) and the codes of conduct are non-binding legal formulas designed to evade judicial control, marketing strategies without real consequences within the company, beyond simple statements of “business ethics.”

The Institut Internacional per l’Acció Noviolenta (NOVACT) is an organization that serves to promote nonviolent actions and peacebuilding strategies in armed conflict areas. Since 2009, NOVACT has analyzed the negative impact of transnational companies on human rights, concretely the violations of Private Military & Security Companies (PMSCs) in Iraq, Afghanistan, Palestine and Colombia. Although, for an extended period of time, the development of the PMSC industry had been cyclic, its undeniable economic success by the greater international community originated with the participation of various governments in the occupation of Iraq in 2003. Nevertheless, the development of the sector has not been normative in the sense that the absence of international regulations renders human rights vulnerable in the wake of extensive PMSC operations throughout the globe.

These have not been the only strategies to emerge from the corporative sector in an attempt to create instruments that work unilaterally and voluntarily for the companies. The International Code of Conduct (ICoC), created in 2010 and designed by private security providers, is another example of the influence that corporations have had in making proposals to safeguard their control of potential binding instruments. The main body of the ICoC is composed by 98 private security contractors, 7 national governments and 18 civil society organizations1.

This composition makes it virtually impossible for the body to perform the functions for which it was created, as an active and sanctioning mechanism and, at the same time, has turned the ICoC into a certification and monitoring body. The functions of the ICoC still do not offer an effective remedy and prevention instruments. Instead, its internal process includes the ability to receive complaints and inform involved actors of the measures that any PMSC has at its disposition, as well as to offer mediation between the PMSC and the person(s) affected, or to investigate other alternative instruments to address complaints.

The Case of G4S

G4S is a leading provider of private military and security services, headquartered in the United Kingdom, with around 625,000 employees operating in more than 125 countries. G4S allegedly committed severe violations of international humanitarian and human rights law in Palestine, due to their role as an accompanying body in the occupation of various areas in Palestine. G4S provides security services and systems in prisons in Ketziot, Meggido, Damon and Rimonim, all of which are said to detain Palestinians as young as from 12 to 17 years old.

In November 2013, the civil society organization Lawyers for Palestinian Human Rights, presented a formal complaint to the U.K. National Contact Point (NCP) for the OECD’s Guiding Principles, claiming that G4S was violating some of the key principles of the Human Rights Guiding Principles, both in Israel and throughout the occupied Palestinian territories. According the two reports published by the NCP in June 2015 and July 2016, the actions of G4S did not comply with the obligations stipulated in this Guiding Principles. They seek to apply preventative measures to mitigate adverse impacts on human rights directly linked to business operations, products or services exchanged through business relationships. Moreover, these principles should also be applied even in those cases in which a company do not contributes to those impacts directly but it does it trough its commercial relations.

To solve the process that followed the filling of the formal complaint and the publishing of the Lawyers for Palestinian Human Rights reports, mediation was offered to both involved parties. The proposal was accepted by Lawyers for Palestinian Human Rights and rejected by G4S, based on the claim that the civil society organization did not have proper competence to negotiate or become involved in the matters of their private enterprise. Besides covering itself in the confidentiality of its contractual obligations, G4S withheld information and, according to the report, manipulated the results of the process in its public statements, not mentioning that they had violated the OECD Guidelines for Multinational Enterprises, culminating in the formal refusal to accept responsibility.

This case is a demonstration of the limitations of the non-binding codes of the OECD. These fundamental weaknesses occur in many other cases, such as with the Gamma Group and their lack of collaboration with the UK NCP in 2016, as well as the inability of the Spanish NCP to prevent the violations of human rights committed by the firm Prosegur.

In an effort to analyze the military and security industry with the aim to prove the inefficacy of the non-binding formulas when it comes to trying to ensure that the companies respect human rights, public policies regarding business and human rights need to go a step farther towards the establishment of legally binding obligations for the private sector. In this step, it is important not to limit policy to the promotion of Corporate Social Responsibility as a moral duty but, instead, to promote an approach that respects the basis of human rights. The nonexistence of this policy, renders human rights particularly vulnerable amid expansive corporate activity.

In the process of defining its own model, Catalonia has a great opportunity to project itself as an international actor in the protection of human rights and peace maintenance. This aspiration involves the defining of a coherent relationship between public policies related to the promotion of Catalan companies and various international cooperation programs. But, above all, this endeavour requires the establishment of binding codes that ensure that catalan companies working beyond its national borders respect human rights.

The ratification of Resolution 359/XI, approved by the Catalan Parliament on the 4th of November 2016, declares the commitment to establishing binding legal instruments, as well as the creation and implementation of inspection mechanisms, normative innovation and sanctions to be applied by the Centre d’Avaluació dels Impactes de les Empreses Catalanes a l’Exterior, (Evaluation Centre of Impacts by Catalan Companies Abroad).

A great step in the right direction that is already happening.