The Privatization of Humanitarian action: implications and challenges of the involvement of PMSCs in the Humanitarian field 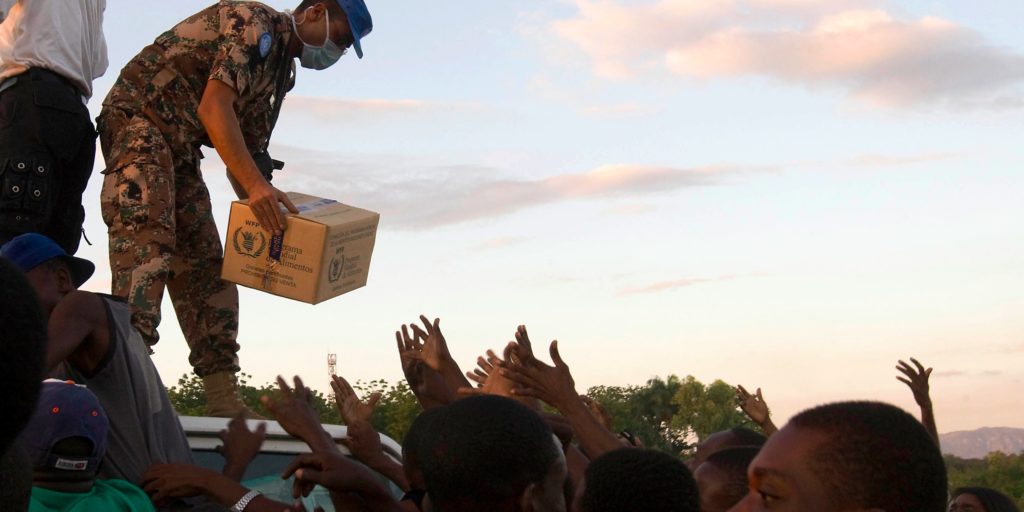 Private Military and Security Companies (PMSCs) have been involved in a variety of conflicts worldwide, most notably since the end of the Cold War in the beginning of the 1990s. Nonetheless, after the Iraq and Afghanistan invasions in 2003, observers both inside and outside the humanitarian aid community, started noticing an increasing interest of the private military and security sector in entering the humanitarian sphere.

This article aims to describe the involvement of PMSCs in humanitarian actions, highlighting the lack of regulation and accountability when operating in those settings.

Humanitarian action consists on the assistance to victims of disasters, including armed conflicts and natural catastrophes. It entails the provision of humanitarian aid (that is, the provision of basic goods and services) as well as the protection of victims and their fundamental rights, through monitoring and advocating the compliance with International Humanitarian Law (IHL) and International Human Rights Law (IHRL).

One of the most relevant milestones in the evolution of humanitarian action is the 1968 Biafra famine. Due to a lack of presence of the UN and bilateral aid, humanitarian organizations intervened in alleviating the situation, being it the first humanitarian operation leaded by non-governmental organizations (NGOs). Médicins Sans Frontiers (MSF) was founded as a consequence, and its creation was followed by a proliferation of aid organizations, such as Doctors of the World, Oxfam or CARE, along the decades of the 1970s and 1980s. In the following decade, during the 1990s, the end of the Cold War led to a greater development of the humanitarian sphere, both in terms of number of agencies and budget.

The purpose of IHL is to protect the wounded, sick and shipwrecked war prisoners or civilians from the armed forces during armed conflict situations. It is ruled by the Geneva Conventions (1949) as well as its Protocols I and II (1977). These Conventions confer to the ICRC the responsibility to supervise and monitor the application of IHL, as well as to promote and inform on the Fundamental Principles that guide humanitarian action. These principles are the principles of humanity, neutrality, impartiality, and independence. They ensure that humanitarian action is not interpreted as favorable to one of the parties in detriment of the other, and that assistance is provided to all victims regardless of their race, gender, political ideology or belonging to a determined social group.

Therefore, an essential tool in trying to ensure the compliance with these principles is that the organization commits itself to respect the Codes of Conduct.

There have been several attempts to create a unitary Code of Conduct among humanitarian organizations. Two of the most relevant ones are the 1994 Code of Conduct for the International Red Cross and Red Crescent Movement and NGOs in Disaster Relief, and the 1998 Sphere Project.

The latest development in this regard is the 2014 Core Humanitarian Standard (CHS), formulated twenty years after the 1994 Code of Conduct for Disaster Relief. It sets up nine commitments for organizations and individuals working in humanitarian response, based on the Fundamental Principles. The CHS will substitute the Core Standards included in the Sphere Project, and it aims at combining “the best of existing standards and be more embedded” [1]. It diverges from the 1994 Code of Conduct on its bottom-up approach, given that it is written from the crisis-affected communities’ perspective, and several individuals and organizations were consulted throughout its 2-year elaboration process

PMSCS VIEW THE HUMANITARIAN SPHERE AS A MARKET WHICH, IN ADDITION TO ECONOMIC REVENUES, BENEFITS THEM IN TERMS OF LEGITIMACY AND CREDIBILITY

The beginning of the relation between PMSCs and humanitarian agencies is framed in the context of an increasing privatization of military services in conflict zones during the 1990s. The presence of these companies in the humanitarian and development field increased during the following decade, after the Iraq and Afghanistan invasions in the beginning of the 2000s. After these events, there was a surplus of PMSCs and its personnel, and they began seeking to expand to new markets.

In addition to this, a growing level of insecurity in humanitarian operations and the increasing violence targeting humanitarian workers also led to an increase of PMSCs presence. This growing demand was also due to a lack of funding and specialized staff to internally cover these security needs.

In regards to the nature of the involvement of PMSCs in humanitarian sphere, its services are not limited to security tasks. These companies provide armed or unarmed guards, support services (logistics, training, intelligence, etc.) and post-conflict reconstruction services, such as demining. The most commonly used service is currently the provision of unarmed guards. The following graphic shows the most demanded services by humanitarian agencies, according to 2009 data from the Humanitarian Policy Group [2]: 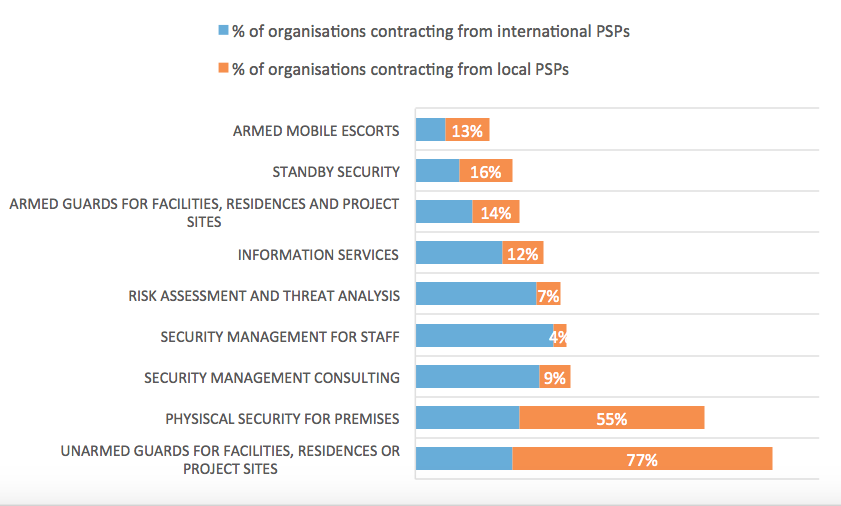 “CONTRACTS BETWEEN HUMANITARIAN ACTORS AND PRIVATE AND MILITARY AGENTS HAVE TAKEN PLACE IN NEARLY EVERY WAR ZONE”, PETER SINGER

According to Peter Singer, “contracts between humanitarian actors and private and military agents have taken place in nearly every notable war zone” [3], including countries such as the DRC, Mozambique, Sierra Leona, Somalia and Sudan, among others. Nonetheless, although many experts talk about this interaction, there is no public systematized data about it and neither companies nor humanitarian agencies inform about this interaction on their websites or reports.

Despite the lack of information, this existing relation have been pointed out by some researchers. According to their findings, some of the biggest humanitarian agencies have been clients of private military and security contractors. To name some, the ICRC, the International Rescue Committee, CARE or Caritas are some of the aid organizations that have used Defense Systems LTD (DSL), a subsidiary of ArmorGroup, along with inter-governmental and governmental organizations such as the UN, UNICEF, ECHO or USAID.

Regarding the services provided, organizations such as CARE and the World Food Program (WFP) have hired armed escorts in order to protect their convoys, and UNICEF contracted Security Officers from DSL in Somalia and Angola. The UN, as well as the ICRC and World Vision, have been reported to have used private military contractors to protect their premises in Sierra Leone and in DR Congo. Lastly, Oxfam has been reported to have contracted unarmed guards from a local security company in Sri Lanka. The existing data is, nonetheless, insufficient to understand the real extent of the involvement of PMSCs in the humanitarian field. As stated by Benjamin Perrin, “the nature and extent to which humanitarian organizations hire private security companies remains relatively unexplored” [4].

In the case of UN’s use of PMSCs both through its agencies and in peacekeeping missions, some contract records for security services can be found in UN websites, but in case of some agencies like UNICEF and WFP the data is not accurate enough.

According to Pingeot, “the contract records for ‘security services’ made available on UN websites presents a very incomplete picture and greatly understate the overall totals” [5]. The lack of transparency surrounding PMSCs involvement in the UN and the allowance to subcontract and establish indirect arrangements has resulted, apart from blurring responsibility, in outcomes such as the hiring or warlords in Afghanistan by a PMSC under UN contract.

A low number of articles and reports have mentioned the involvement of PMSCs in providing services for humanitarian agencies or peacekeeping missions. Chris Kwaja’s article detailing the involvement of private security contractors in Sudan, and more precisely in the UN and African Union (AU) mission in Darfur (UNAMID). UNAMID (2007 – 2010) was the first-ever hybrid peacekeeping mission deployed by the UN, meaning that it was enhanced in collaboration with a regional agency, the AU in this case.

This mission was supported by two PMSCs: Pacific Architects and Engineers (PAE), and DynCorp. It was part of a five-year contract between the US State Department and these two PMSCs in order to support peacekeeping and conflict management tasks. As mentioned in this article, these companies developed the following roles: “securing and protecting refugee and internally displaced person (IDP) camps from attack; securing and protecting civilians in Darfur and across the border in Chad at risk of attack; setting up a no-fly zone around the camps and at risk communities; providing security for humanitarian organizations working in Darfur (…); and employing human surveillance specialists and reconnaissance technologies to monitor the movements of rebel groups and militias, and providing intelligence on their location and operations.” [6]

Kwaja highlights the involvement of PMSCs in UNAMID focusing in two aspects: accountability and role-clarity. On the one hand, the author states that PMSCs currently operate in a regime of impunity and lack of effective regulation which “results in physical, financial and reputational risks that hamper their effective operations” [7].

For instance, DynCorp and PAE were hired in Darfur despite previous accusations of Human Rights violations. On the other hand, the question of role-clarity is also mentioned. PMSCs have different clients, and in the case of Sudan, they developed different tasks. DynCorp’s contract in 2001 asked to train and turn the former rebel group into a professional military force (Sudan Peoples’ Liberation Army/Movement (SPLA/M), and other military and security related tasks. The lack of clarity in regards to their role compromised PMSCs independence as well as their acceptance by local populations.

Lately, there have been launched some initiatives to regulate PMSCs, such as the Montreux Document (2008), which restablishes the existing legal obligations of states with these companies, or the ICoC (2010), an instrument of PMSCs self-regulation. Nonetheless, these instruments are not binding. Nor are the Codes of Conduct that apply to humanitarian agencies and that could regulate their interaction with PMSCs. Therefore, there is no guarantee that private contractors respect the Fundamental Principles of Humanitarian Action when hired by humanitarian agencies, and this endangers the legitimacy of humanitarian projects where PMSCs are involved.

In the long term, the engagement of PMSCs in the humanitarian field might contribute to militarize humanitarian action. Through their involvement, PMSCs may redefine what humanitarian action means, as they “analyze conflicts and crises in terms of their own business opportunities, ignoring complex political and social dynamics that could lead to less costly and less violent solutions.” [9]

As long as no mechanisms are set up to monitor the activities of PMSCs, it will be very difficult to end with the secrecy that surrounds their involvement in humanitarian actions and the risk to be against the Fundamental Principles and International Humanitarian Law.

Global Policy Forum. War and/or Peace: How the Private Military and Security Industry is Trying to Rebrand Itself as a Humanitarian Actor. (2012). Retrieved from: https://www.globalpolicy.org/pmscs/51347-war-andor-peace-how-the-private-military-and-security-industry-is-trying-to-rebrand-itself-as-a-humanitarian-actor.html.

Pierre Krahenbuhl. The militarisation of aid and its perils. ICRC. (2011). Retrieved from: https://www.icrc.org/eng/resources/documents/article/editorial/humanitarians-danger-article-2011-02-01.htm.

The Sphere Project. The Sphere Handbook | What is Sphere? Retrieved from: http://www.spherehandbook.org/en/what-is-sphere/.

Tina Linti. UN’s Use of Private Military and Security Companies in Peacekeeping Operations-Is There a Legal Basis? Politikon 29 (2016).