The Northern Triangle of Central America as a PMSC Powerhouse 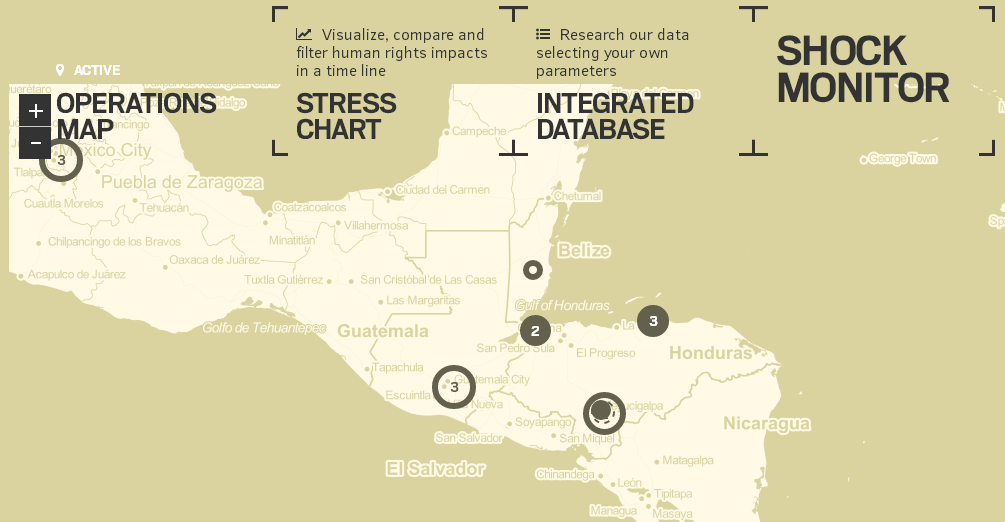 Situated between drug producers in the Andean Ridge nations and their consumer clientele in North America, the geographic landscape and vast terrain of the Northern Triangle of Central America, a region composed of Guatemala, Honduras and El Salvador, is a primary passageway for narcotics and weapons. The region’s dense jungles and rural, sparsely populated areas provide ocean or land-borne traffickers with sufficient cover and discretion, especially due to its alignment to roadways and trails leading north through Mexico (USMC 2012:2-3). Notably, the high level of narco-trafficking in the region has transformed and shaped the dynamics of insecurity within the Northern Triangle and facilitated the establishment of outlets for logistic support services, including transport, storage and packaging, to criminal cartels and gangs involved in the illegal narcotics and arms trade (Chinchilla 2002:10).

The thriving networks of organized crime have directly affected the rates of violent crime and homicides throughout Guatemala, Honduras and El Salvador. According to the 2013 report by the United Nations on Drugs and Crime, the Northern Triangle nations scored the highest in average homicides per 100,000 citizens: Guatemala with 39.3, El Salvador with 39.8 and Honduras with 84.3, where an astonishing 4% of homicides committed between 2010-2013 resulted in convictions (El Heraldo 2014).

Taking into consideration the threshold of violence and criminality in the region, the Northern Triangle, contradictingly, has the largest concentration of private security personnel in Central America (Ramsey 2012). The prevalent insecurity felt among populations throughout the Northern Triangle where rising crime rates and ineffective law enforcement has led to the growth and increased dependence on private security services, whose impact hast the potential to reinforce public security. Since the 1980s, the Northern Triangle alone has experienced a substantial increase in the number of community-based agencies or vigilante groups of concerned citizens that engage in crime and conflict prevention services where they have been largely ignored or outside the scope of law enforcement, founded on the principles of deterrence and exacerbation of local and regional criminality (Müller 2010:131). The international private security industry is estimated to be worth $244 billion in 2016 whereas $30 billion of which accounts for Latin America (UNODC 2014a:2). Estimates show that over 4 million working-age citizens are employed by the private security sector in Central America, which indicate a spike in regional demand for such services by individuals, non-governmental organizations as well as public sector governments (Dammert 2008:3, UN 2013:6). In Central America alone, private security guards outnumber police personnel in all countries except El Salvador (UNODC 2012:71).

Corresponding to the increase in supply of private military firms and personnel operating in the international community was an increase in demand for smaller-scale military services. The demand is multi-dimensional in the sense that consists of developed states with downsized military sectors, developing or emerging states seeking to upgrade or advance their military capabilities in preparation for entrance into defense institutions or organizations, as well as non-state actors such as other private firms or citizens in territories of weak or unstable nations (Avant 2008:441-4). This fact alone can explain the increased presence and activity of private firms and the subsequent push for the privatization of security in the Northern Triangle due to the development needs and low capacity of public sector security forces. The surge in private military and security operations within the diverse regulatory systems enacted in each country in the region, render the Northern Triangle to be a strategic location where private military and security networks can flourish due to the region’s increased crime rates, high rate of insecurity and overall diminished trust in the public sector government. Throughout the region rooted in the high criminality and low conviction rates, notably in Honduras, there is an apparent lack of social respect for the rule of law and diminished authority in criminal justice systems.

In order to maintain authority over constituents, government regimes in the Northern Triangle have demonstrated and justified their right to power on their ability to provide essential goods and services to the public domain. Since the state is considered to have the monopoly on the legitimate use of force, defense can be considered a public good, which is challenged and neglected by popular and political opinion in the region due to the significant rise in private security activity. In 2000, a poll of Latin American policymakers established that defense issues and military affairs are widely regarded as insignificant and cast a negative overview of domestic armed forces as institutions (Pion-Berlin & Trinkunas 2007:91). This can be explained by the former militant status of previous Central American regimes, most often controlled by military installments with inflated defense budgets, prompting a general reduction in defense spending after the political transition to democracy (Pion-Berlin & Trinkunas 2007:93).

The privatization of security in the Northern Triangle and greater Central America parallels the spread of neoliberalism, globalization and its subsequent increase in the level of private property owned by citizens, as well as the privatization and deregulation of economic and federal services in the international community due to the rise in demand for security to patrol various outlets (Shearing & Stenning 1983:497-498). The persistant insecurity and perception of the state’s inability to effectively control violence and maintain security status quo has led to the increase in demand for private security actors, which is considered to further polarize populations and create new avenues for insecurity, violence and terror due to the implicated costs in hiring private security services (Sanchez 2006:189). The growth of economic activities linked to private security is closely related to the degree of poverty and exclusion in a given society, which is also tied to illegal economic activity. Public security can be supplemented or wholly replaced by private security among the wealthy while gang participation increases in lower income communities to cover the inabilities of public security provision, creating a social divide and expanding networks of organized crime and illegal activities (Briceño-León and Zubillaga 2001:32).

Political and social insecurities constitute the foundations for fear and crime in a given population (Dammert & Malone 2006). Taking into account the end of the Salvadoran Civil War in 1992 and the Guatemalan Civil War in 1996, political instability and ongoing domestic conflicts remain major thematic elements within the security realm of the Northern Triangle nations. Together, the instability and domestic conflict, paired with the geographical location of the Northern Triangle provided the perfect breeding ground for intricate systems of organized crime and trafficking, further plaguing the region with heightened perceptions of insecurity due to the increased presence of criminal networks.

Democratization movements in Latin America during the 1980s and 1990s produced a shift in the notion of military involvement in interstate conflicts contrasted by passive, diplomatic alternatives. With minimal regional conflicts, the implementation of democracy caused many Central American military sectors to gradually downsize or eliminate military operations, training schemes and offensive capacities due to constraining economic factors such as a general reduction of public sector spending, pressures from international financiers and shifting political priorities of the allocation of financial resources to other sectors, effectively reducing the capability of public sector security forces (Pion-Berlin & Trinkunas 2007:93). This period of reduction culminated in the mid 1990s, when Latin America became the region with the lowest defense expenditures, arguably creating a demand and subsequent market for private sector security actors (Klare & Andersen 1996:1).

In the political context of the Northern Triangle and greater Central America, the topic of security and military affairs has been widely neglected in the agendas of democratic politicians and their political party platforms (Diamint 2002). For elected officials, avoiding international security discourse has enabled politicians to concentrate their national defense and security agendas on neutralizing domestic or military threats to the ruling political regime. However, when politicians fail to incorporate security into their political agendas, they endanger destabilizing democratic civilian control over military affairs and relinquishing authority to military leaders by allowing self-management practices and military autonomy (Pion-Berlin & Trinkunas 2007:95). Despite recent absences of existential, international threats to the Northern Triangle states, public sector military regimes have managed to maintain a formidable presence in domestic policy through joint-task security provision and border control. In theory, more policing responsibilities allocated to the military should produce a force multiplier effect on the crime rate, causing a short-term increase due to the heightened security personnel assigned to detect and investigate crime (UNODC 2007:80).

In 2003, the Organization of American States hosted a special conference on security, identifying terrorism, narco-trafficking, transnational organized crime, corruption, asset laundering, extreme poverty, social exclusion, natural and man-made disasters, and the transport of hazardous materials to be significant security threats in Central America. Despite the complexity of the each threat to the region, threats such as terrorism, narco-trafficking, and corruption are generally not regarded as security issues warranting national military or armed responses. The differentiation between the two concepts has a direct impact on the identification and intervention in light of a perceived threat. This variation in perceived responses to non-traditional threats had led to the militarization of public security networks (such as increased joint task forces), which is apparent in the wake of increased cohesive military and police operations in the Northern Triangle (Chinchilla 2002:1).

The rising crime within a country puts pressure on nation-states to militarize their societies in order to maintain law and order (Sanchez 2006:193). However this law and order cannot be achieved through the direct incorporation and integration of the military and police due to the potential consolidation of military power outside the democratic rule of law, in respect to human rights and using armed personnel against constituents of a given country. There is a fundamental difference in the manner in which training and execution of security policy is enacted between military and police forces. Public sector military personnel are trained to occupy or respond to international threats, not to police domestic citizenry. According to a UN report on Crime and Development, democratic policing requires “community interaction, not just intimidation,” “investigation, not just the extraction of confessions” and “solving problems, not just waging war with criminal groups.” (UNODC 2007:78).

While the Northern Triangle is justifiably considered the most dangerous region in Latin America, the dynamics of security highlight the crucial nature of the proper governance amid high insecurity. Together, Guatemala, Honduras and El Salvador levy diverse approaches to security policy and private military regulation. Weak governance mechanisms pertaining to the private military and security industry could enable criminal organizations to incorporate or legitimize their activities and networks due to the general lack of governmental, institutional and law enforcement capacity to effectively monitor activity and impose efficient regulation and auditing of registered firms in the region. The overwhelming insecurity in the region proves the inability of securitization actors, whether public or private, to effectively deal with transnational and non-traditional threats that plague the region amid its increased violence. This leads to a debate on the processes of privatization of security in specific operational contexts and the securitization of societies by their own means. While the impact of increased securitization actor on civilians and society in the region is ambiguous in the long run, the region is an extraordinary case of private security proliferation alongside public securitization efforts.

United Nations. “Report of the Working Group on the use of mercenaries as a means of violating human rights and impeding the exercise of the right of peoples to self-determination, Addendum: Mission to Honduras.” 5 August 2013.

United Nations Office on Drugs and Crime. “Crime and Development in Central America: Caught in the Crossfire.” Vienna: UNODC. May 2007.