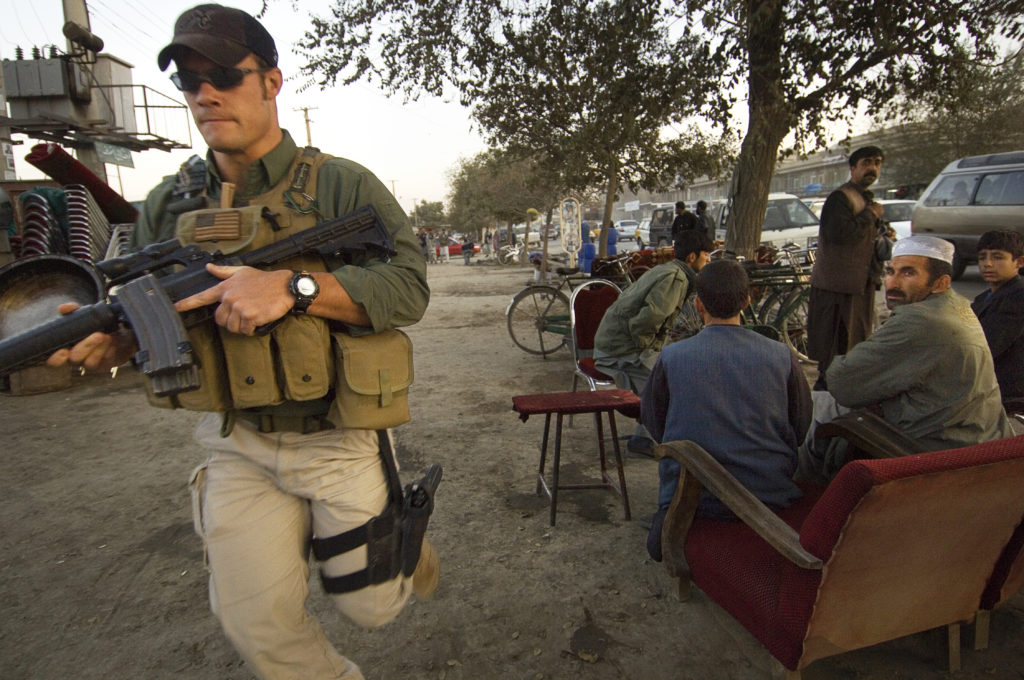 The international seminar on “Human Rights and New Forms of Mercenarism: Violations, Limits and Opportunities of the International Legal System” took place on 21 April, at the Palau Macaya in Barcelona, with the aim of exposing, analysing and operationalizing the causes and impacts of private sector military and security companies on human rights.

The discussions, round tables and lectures were themed around various aspects of the private military and security sector. The participating actors included experts from academia, military officers, and representatives of civil society organizations with institutional and political officials.

The seminar also incorporated discussions that focused on the consequences and potential impacts on a wide variety of human rights issues, as well as analyzing the operational mechanisms of private sector military and security companies, including the corresponding role of states governments and the validity of the international legal system in regulating and governing this industry.

The seminar platform was focused both on the detection of limits and the presentation of new initiatives that could impose governance instruments by regulators over the private military and security sector. Private Security and Military Companies (PMSCs) are widely considered a new form of mercenarism that, according to Professor of Public International Law at the Universitat de Barcelona and Academic Director at CEI International Affairs Dr. Helena Torroja, does not fit into the current definition of “mercenary”.

Through her work as director of the report, “Violations of Human Rights by the New Forms of Mercenarism and Public International Law”, Dr. Torroja introduced the main topics of the seminar: the protection of the human right to “security” and, therefore, the national obligation of states to guarantee this protection to all their citizens. Dr. Torroja also outlined the fact that ultimately, citizens of a given jurisdiction suffer the consequences of the PMSC activity, pointing out that the current mechanisms of self-regulation or pre-existing political agreements are not sufficient. Instead, according to Dr. Torroja, the privatization of certain sectors has major implications, indicating the necessity of proper governance.

Next, Dr. Mario Laborie Iglesias, a colonel in the Spanish Army and political adviser in various institutions within the European Union spoke about the numerous international contexts in which private sector military and security companies operate. He summarized the “Western” perspective of security within the global system, in which human security contains a responsibility to protect. According to Dr. Laborie Iglesias, this responsibility is not being applied effectively or evenly throughout the globe and concluded that there are formidable obstacles presented to a state actor in their effort to implement this responsibility.

The former member of the UN Working Group on the Use of Mercenaries, José Luis Gómez de Prado, underlined the fact that PMSCs violate a long list of International Human Rights and relayed examples of torture, executions and violations of the right to health. According to Gómez del Prado, contrary to the traditional definition of “Mercenaries”, the modern private sector military and security companies are not only legally recognized by governments and institutions, but also registered in the national trade councils. In addition, many companies have direct, important connections with militaries, politicians and police corps, as well as with national intelligence agencies. This, according to Gómez del Prado, presents major dilemmas in the implementation of proper governance due to the wide variety of actors with invested interests in the private military and security sector.

The adoption of local, national and international action plans with the main objective of imposing binding limits to the privatization of security were highlighted as an essential strategy by Dr. Torroja, which also involves the military. She recalled the existence of a significant number of general international regulations that could limit the phenomena of privatisation of security. These regulations could converge and establish an international minimum legal standard. Along with the progressive development of principles and norms,  this minimum standard could be the basis for an international treaty or a United Nations General Assembly’s statement. One of the next steps in this direction should be, according to Dr. Torroja, is establish an strategy that brings together and calls civil society, academia and institutions to action.

The senior legal advisor of the International Commission of Jurists (ICJ) and associated researcher at the CEI International Affairs, Carlos López, exposed the current legal vacuums on the international law to highlight the importance of identifying which mechanisms would be the most appropriate to address these legal issues. López stated that the implementation of certain mechanisms would increase the accountability of PMSCs in the identification of human rights violations, whether PMSCs and the states who hire illegal security services –   are responsible for this violations.

The Director of the Human Rights Business Program at American University in Washington D.C., Dr. Rebecca DeWinter-Schmitt, analysed the different soft law initiatives that could cover and limit the ability for the sector to operate within vacuums in the international legal system. DeWinter explained in depth the successes and shortcomings of the Montreaux Document, the International Code of Conduct and the National Actions Plans, as well as which criteria and mechanisms were essential in implementing control and regulation over the activity and legal obligations of PMSCs and states that contract their services.

In line with the vision and strategy of the UN Working Group on the Use of Mercenaries, Jordi Palou-Loverdos of NOVACT, presented the new International Observatory on Private War and Human Rights, ShockMonitor. The campaign represents a necessary research tool that tracks private military and security companies, their operational contexts, clients and any alleged infractions to human rights to assure accountability and transparency in the sector. NOVACT’s Co-Director, Felip Daza, presented the online tool hosted on Shock Monitor’s website, ShockMonitor.org, which effectively monitors and visually presents the different contexts where human rights violations take place, with the aim of working along with the United Nations in redefining the functions and obligations of state governments in addressing these issues which occur within their jurisdiction.

Through the work of Shock Monitor, the continuous monitoring of the international activity is necessary, given the way this private military and security industry operates. According to research from the Shock Monitor database, private military and security companies are hired by more international actors than domestic clients and most of the contracts come from public sector governments. However, despite a significant the increase of PMSC contracts from other private actors, such as the extractive mining and energy sectors, the multiplication of their functions and specializations is causing an increase in the number of reported violations to human rights.

To see all the guests that took part in the seminar, check the full programme here.